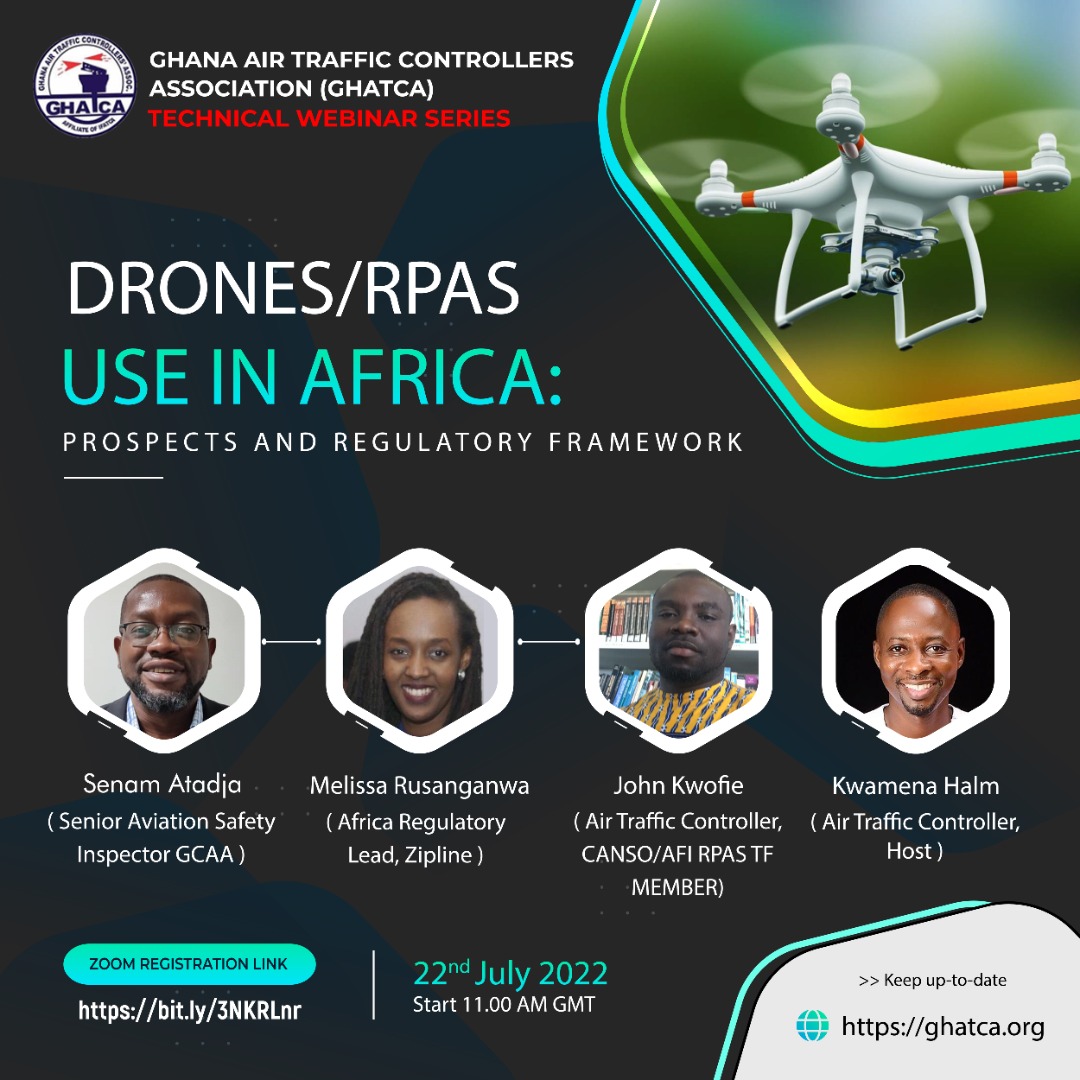 The use of unmanned aircraft systems for civilian purposes has become prevalent within the last decade. Drones are gradually becoming a part of our lives with applications and uses in agriculture, aerial surveying, drone journalism, search and rescue, remote inspections, and medical supplies to inaccessible communities among others.
The expected explosion in civilian drone/RPAS use within the next few years is set to challenge and redefine airspace classification, use and management.
How is this technology being used to improve the lives of people living in Africa? Be it for commercial or recreational purposes, what regulatory framework governs the use of drones and RPAS? Are these regulations known to enthusiasts and Drone/RPAS vendors? How are drones and RPAS integrated into the airspace vis-à-vis manned air traffic to achieve safety and what effects do drones have on the safety of manned aircraft? Are there privacy and security concerns regarding the use of drones?
In this webinar, Melissa Rusanganwa from Zipline will share the experiences of Zipline in their novel use of drones to deliver badly needed medical supplies to remote communities across Africa. John Kwofie, an Air Traffic controller from the Ghana Civil Aviation Authority and a member of CANSO/AFI RPAS TASK FORCE will discuss ATM, safety issues and RPAS integration strategies whiles Raynold Senam Atadja, a Senior Aviation Safety Inspector and a member of the ICAO RPAS panel will discuss regulatory issues regarding present and future drone/RPAS use.

Speakers
Melissa Rusanganwa
Zipline Africa Regulatory Lead
Melissa started at Zipline as Public Affairs Lead to handle Governmental Affairs and now as part of the Regulatory lead, as Head of Africa Regulatory Affairs, Melissa manages Zipline’s integration and regulatory approvals into the national airspace on the African continent.
After joining the team in Rwanda, she has continued to solidify relationships with different Governmental stakeholders and Regulators to smooth operations and Zipline’s integration into the national airspace.
Melissa holds a double degree in Political Science with a concentration in Global Governance, and International Studies with a concentration in Diplomacy from Bishop’s University in Canada.
She previously lived and worked in Canada in Specialty Pharmacy and interned at the International Civil Aviation Organization and the Rwanda Civil Aviation Authority.
Upon an internship at the Rwanda Civil Aviation Authority and her urge to go back home, she decided to move back to Rwanda and be part of the development of the country and that is how she joined the Zipline team.

Raynold Senam Atadja
Mr. Raynold Senam Atadja is a Senior Aviation Safety Inspector with the Airworthiness Inspectorate Division and qualified as an ICAO Government Safety Inspector Instructor for Airworthiness and Personnel Licensing. He is also the Coordinator of the National Remotely Piloted Aircraft Systems (RPAS) Implementation Committee in Ghana. He serves on the ICAO RPAS Panel with Working Group 5. Mr. Atadja is also Ghana’s representative on the Joint Authorities for Rulemaking on Unmanned Systems (JARUS).
Mr. Atadja has a Master of Science Degree in Aerospace Engineering from the Samara State Aerospace University in Russia and an FAA A&P License which he obtained whiles studying at Embry-Riddle Aeronautical University, Daytona Beach Florida, USA. He is currently enrolled with the Accra Institute of Technology pursuing a Master of Science Programme in Occupational Safety and Risk Management.