Resilience of the Aviation Industry during Pandemics 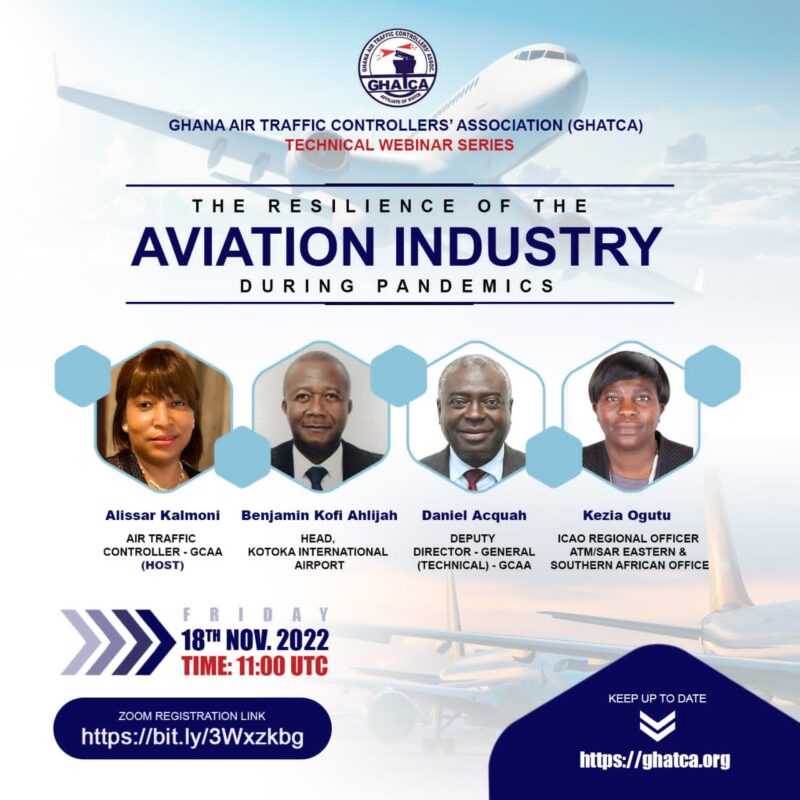 Resilience of the Aviation Industry during Pandemics(Virtual)
Date: 18th November 2022
Time: 11:00 am (UTC)

The onset of the COVID-19 pandemic and the subsequent closure of land and air borders woke us up to a new reality: we could not travel by air for family visits, medical treatment, leisure or business. Airplanes which normally covered the skies all over the world were grounded. Congested busy Airspaces were empty. It was a scary and uncertain time for everyone. The gradual easing of restrictions and their attendant requirements showed us how frustrating it was to adapt to the new normal. Air travel is the safest, fastest and most reliable means of transport making it a necessity rather than a luxury.
When we realize that an activity we cannot live without may be threatened, we adapt, innovate and build resilience to ensure that we are able to function and live our normal lives as far as practicable in the face of adversity.
Pandemic resilience provides aviation operators the ability to minimize the impact of pandemic situations on air traffic and connectivity, as well as day-to-day airport operations.
But above all, resilience is about thinking ahead to safeguard the safety, security, comfort and well-being of passengers and other airport visitors.
During this webinar, we will feature Technical Experts on the African Continent who were at the forefront of dealing with the covid-19 pandemic at both National and International levels: They will be sharing their thoughts and experiences on lessons learned and how their organizations emerged through very challenging times as well as giving insights on how to build resilience going forward.

What is our preparedness level and are we as an Industry adopting a proactive or reactive approach in dealing with any future pandemics which may spring up along the way?
Please join us to find out!

Benjamin Ahlijah (IAP)
BENJAMIN is an International Airport Professional (IAP) of the Global ACI-ICAO Management Professional Accredited Programme (AMPAP). He has over twenty-five  (25)  years of experience in  Airport and  Civil Aviation  Management ranging from commercial,  operational,  safety, environment,  aerodrome certification,  master planning,  regulatory and audit aspects.
He has a proven track record of developing and implementing the GACL Safety Management Systems from scratch to a full-blown Safety Management System which permeates every fibre of the Organization and has led to both local and international recognition leading to various awards such as Excellence in Health Safety Environment and Quality Assurance (HSEQ) – Ghana Shippers Award and Best Improvement in Safety (under 50,000 ATMs) – ACI Safety Award.
He is currently the Head of the  Kotoka  International  Airport  (KIA)  of the  Ghana  Airports Company Limited (GACL) and has oversight responsibility for the day-to-day management of the  Airport to ensure smooth facilitation,  safe,  secure and efficient movement of  aircraft, passenger, baggage cargo and mail. He also has oversight responsibility for the service quality delivered to Passengers leading to  KIA winning three  Airport  Council  International  (ACI) Airport Service Quality (ASQ) Awards in the category of Best Airport by Size and Region (2 to 5 million Passengers).
Mr. Benjamin Ahlijah was a leading member of the team that drafted the National Pandemic Plan for the resumption of  Aviation  Business in  Ghana leading to the award of the ACI  Health Accreditation  Certificate for the  Kotoka International  Airport,  in recognition of the commitment to prioritization of health and safety measures in accordance with ICAO Council Aviation Restart Task Force (CART) recommendations and in alignment with the ACI Aviation Business  Restart and  Recovery guidelines along with industry best practices. This plan eventually became the template for the resumption of the aviation business for many African Airports.

Daniel Acquah
Mr. Daniel Acquah is a product of Mfantsipim School, Cape Coast, and then the Kwame Nkrumah University of Science and Technology (KNUST) where he qualified with BSc (Hons)   Agricultural Engineering and MSc Mechanical Engineering (Thermo Fluids option) degrees.
After his university education, he worked with the Ghana Atomic Energy Commission in the Nuclear Engineering Department as a Research/Scientific Officer and was also in charge of the cooling system of Ghana’s first nuclear reactor (GHAR-1).
He moved on to the Ghana Civil Aviation Authority (GCAA) in 1995. He was further trained to fly and also licensed as a Flight Operations Office/Aircraft Dispatcher by the Federal Aviation Administration (FAA) of the United States of America. He rose through the ranks to become the Manager for Personnel Licensing, a Section in the Safety Regulation Department of GCAA that issues licenses to Pilots, Flight Engineers, Aircraft Maintenance Engineers, Air Traffic Controllers, Air Traffic Safety Engineers, Cabin Crew etc.
Between 2002 and 2006, Mr. Acquah acquired another engineering profession as an Aircraft Maintenance Engineer in the United Kingdom and worked with British Airways Maintenance Glasgow (BAMG) for over two (2) years on both Boeing and Airbus Aircraft for practical experience and also obtained the then European Joint Aviation Authority Aircraft Maintenance Engineer’s Licence.
He returned to Ghana in 2007 and became the Deputy Director of the Safety Regulation Department of GCAA (in charge of the Airworthiness of Aircraft in Ghana).

He rose again in GCAA to hold the office of the Director of Safety Regulation Department from 2010 to 2020 and then from 2020 to date he has been the Deputy Director-General (Technical) of the Ghana Civil Aviation Authority.

Mad Keziah Ogutu
Keziah Ogutu is the Regional Officer ATM/SAR with the ICAO Eastern and Southern African Regional Office, Nairobi Kenya. In this capacity, she is responsible for providing technical support to 24 AFI states in the area of ATM and SAR.
Keziah is a trained Air Traffic Control Officer with five Ratings i.e. Aerodrome Control, Approach Control, Area/Enroute Control and Terminal and Enroute Surveillance Control. She is also a qualified SAR Mission Coordinator (SMC) and an On-the-Job-Training Instructor.
Keziah worked as a Chief Air Traffic Control Officer with the Kenya Civil Aviation Authority (KCAA) where she worked for 10 years as the Head of Air Traffic Management at Jomo Kenyatta International Airport (JKIA), Nairobi this included being in Charge of the Nairobi Area Control Centre, Nairobi Terminal Control Unit and the Jomo Kenyatta Control Tower. Thereafter she served as Chief in charge of ATM training and Standards with KCAA from 2018 until she joined ICAO in 2019.
Keziah served as the Kenya Air Traffic Controllers Association (KATCA) Executive Secretary between 1997 and 2004. She has also served as the IFATCA elected Executive Vice-President in charge of Africa and the Middle East (EVP AFM) between 2012 and 2017.
Keziah has been a member of the IFATCA AFM Region from its inception and continues to be a member of the AFI Tactical Action Group (TAG) that monitors the safety trends in the AFI RVSM airspace. She is also a founding member of the AFI Incident Analysis Group (AIAG). She has been involved in various initiatives in the AFI ATM, including the creation of the UPR zone in the Indian Ocean through the INSPIRE programme. Keziah has also participated in a number of ATM development initiatives in Kenya and the AFI region including airspace restructure and route development.